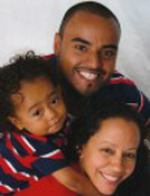 Alma L. Ramos-Gilbert has a BS in Communication with a double major in Spanish. She's also a Social Worker, graduate of Columbia University School of Social Work. Alma is a native Spanish speaker and originally from Puerto Rico. She recently moved from NYC to Omaha, NE, where she hopes to become involved with the local chapter in Lincoln. Having worked in the communications field since 1997, Alma enjoys helping others and using media outlets to express different points of views. Alma became interested in Attachment Parenting prior to the birth of her 3 year-old son in 2006. Alongside her husband, she has enjoyed actively practicing attachment parenting. The hardest thing about her son growing up according to Alma, is not being able to wear him any longer!