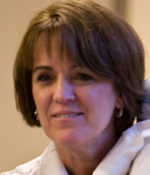 Linda’s degree in elementary/special education gave her skills in teaching and also in writing detailed lesson plans. She put those skills to use as a new mom. She designed the items she wanted in her nursery and then wrote and published her pattern books. Linda is a natural problem solver and wanted to make life easier for parents and babies.

As her children were leaving for college, she learned about infant massage. She began teaching parents to massage their babies in 1999. She taught 3 classes a week for over 2 years until she became a trainer with the International Association of Infant Massage – Sweden. As a trainer she has conducted hundreds of workshops and trained over 1000 educators across the United States as well as in Korea in the United Kingdom. She has written numerous articles, presented workshops at National Conferences such as the Early Head Start, Birth to Three Conference, the National Training Institute for Zero to Three and Prevent Child Abuse America.

In March of 2005, with the creation of Infant Massage USA, she became the Executive Director.